Hi everyone! Today, the WomenNC team attended “Take the Hot Seat” A High Level Intergenerational Dialogue. This session involved many women leaders such as the Vice President of the Republic of Colombia, Lucia Ramirez, the head of the National Institute of Women (Colombia), Nadine Gasman, the president of the senate of Bolivia, Adriana Salvatierra, the CSW Chair Phumzile Miambo-Ngcuka and others. In attendace was also the United Nations Secretary General, Jayathma Wickramanayake who stated, “If there is not enough room at the table then we should make our tables bigger.” I found this quote to be extremely powerful and I am certain that I was exactly where I needed to be at that moment.

At the “Hot Seat” Event I also met a new friend named Lloyd. Lloyd is a member of the Youth Coalition organization and has an amazing story! He was born and raised in the Philippines, but chose to attend graduate school in the UK. This is because Lloyd has an interest in social change, but in the Philippines people who speak out against injustices are frowned upon and viewed as “trouble makers”. Lloyd is studying Global Policy in the UK and holds and undergraduate degree in nursing. He is passionate about women’s health and made the commitment to fight for this issue despite it being considered trivial in the Philippines. Lloyd’s courage to travel to a country outside of his hometown to become educated on women’s health proves that he is a natural born advocate! It was a pleasure meeting him today! 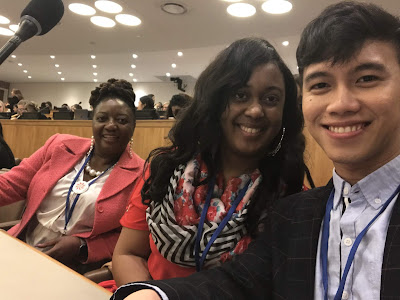