From NC to NYC: The Beginning of CSW 63 with WomenNC

Today, we arrived in New York City for the 63rd session of the Commission on the Status of Women at the United Nations. We started off our trip by heading over to the UN to pick up our official grounds passes and walking into headquarters to explore where we will be spending the next six days. It was incredible to see some of the most famous assembly halls in the UN, the artwork in the entryway, and the paintings of all previous secretary generals. However, it was striking that the secretary general position has only been held by an alarmingly homogenous group of individuals - only men and almost exclusively white men. I hope that WomenNC, as well as all of the other activists and organizations, will play a role in changing this sooner rather than later (I’m looking at you, Sara Darwish!). 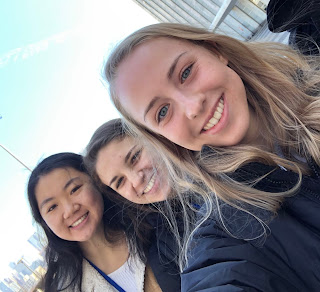 One of the highlights from my day was our group meeting with Beth Dehghan and Dr. Riemann where we discussed the significance of Cities for Cedaw for this CSW Session. Beth spoke with us about coming to the United States from Iran and realizing that the United States also had never ratified CEDAW. Upon realizing that the United States Senate was not going to agree to ratify the treaty at any point in the near future, Beth began strategizing with other activists to determine next steps. Their brainchild from these deliberations became Cities for CEDAW, creating a bottom-up approach.

Unfortunately, many state legislatures, and even some local city and county governments, are not willing to invest the necessary funding to conduct gender analysis. When Beth encountered this problem, she came up with an alternative solution: recruiting college students to conduct research and generate policy recommendations that both matched their interests and provided elected officials with the necessary context and guidance in developing effective legislation. This conversation helped me to understand my unique role as a WomenNC scholar, since this specific model for Cities for CEDAW has only be tested in North Carolina.

I am beyond exciting for this week of programming, learning, presenting, and growing as an activist. The fact that it is near impossible to decide which events to attend at any given time is a testament to the phenomenal opportunities that will present themselves throughout this week. I am particularly excited to attend events and panels that discuss women’s political representation and engagement, gender-based violence, and reproductive justice. One of my main priorities throughout this week is to go to events discussing women’s advocacy outside of the United States and the context of American culture, as much of my coursework and advocacy has been focused on legal change in the United States. I hope to learn about different forms of activism and discussing the most effective ways to increase the role of women in decision-making bodies, which I fundamentally believe would alter the course of other forms of marginalization that women encounter around the world.
Posted by Amelia Steinbach At 9:51 PM