We started off today by volunteering with UN Women to help distribute tickets to those invited to “Take the Hot Seat.” Before that even began, I spent time in “Women, Peace and Security: National Action Plans in the Arab Region - Lebanon and Jordan.” I decided to attend this event because I don’t have any extensive prior experience studying the Middle East and I wanted to learn more about the role of women’s advocacy in the region. As is true for all of the events I’ve attended thus far, it was amazing to listen to a panel full of incredible women - especially women of color - discuss their work to increase the opportunities of women and girls in a region that is generally immediately discredited by the West. 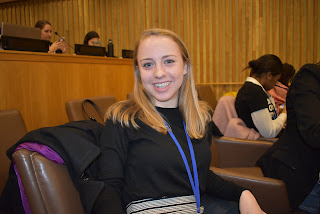 I left the Lebanon and Jordan event a bit early to ensure we got excellent seats for “Take the Hot Seat.” It was a wonderfully pleasant surprise to find out that the young woman from Nigeria whom we met at dinner last night was one of the youth moderators. Olaoluwa Abagun was an excellent moderator, keeping the energy lighthearted and personable, while also pressing the panelists (all female leaders at the UN or in their respective countries) to detail their plans to advocate for youth interests on the larger scale. I particularly enjoyed Marta Ramirez, the Vice President of Colombia, noting that “You’re not part of the future. You’re in the present. It’s in the present that we build the future.” I also agreed with Jayathma Wickramanayake, UN Secretary General’s Envoy on Youth, noting that some resist these movements because of their financial burden, to which she responds “Let it be expensive. That is an investment we have to make. If there’s no space at the table, we have to make our tables bigger.” It was inspiring to hear not only from the panelists, but also the young moderators and multiple young women who asked difficult and insightful questions to ensure their interests were being addressed. 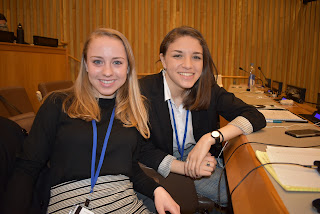 My third event was “Gender Budgeting: Re-shaping resources in support of equality goals” with Ireland and Uganda. Unfortunately, I have not often seen countries in Western Europe and East Africa collaborate so enthusiastically, and it was really interesting to hear the countries’ respective leaders discuss their efforts to prioritize gender and equity issues in budgeting. Uganda has been emphasizing this for much longer than many other countries, and its leaders spoke about the emphasis on equity more broadly so as to encompass other identities, such as ability, class, education, etc. Despite progress, both countries cited the complications of gender-segregated labor markets, with women and men virtually split into professions aligning with traditional gender roles.


My final event for the day was “Mainstreaming Gender into Social Protection: The Ghana Story.” There were several impressive speakers on the panel, but the most interesting part of the panel occurred toward the end, when several Ghanian women in the audience began to challenge one of the men on the panel. He serves as the Chair in their Parliament of the Women and Children’s Commission and made comments about affirmative action that several women vehemently disagreed with. The dynamic was interesting to watch; he did not seem particularly receptive to their perspective, but I appreciated their outspokenness and willingness to challenge authority figures who were supposed to be representing their values. I was also really interested in the Q & A segment of the conversation toward the end where one audience member brought up the country’s policy on abortion and the need for the national healthcare insurance to provide increased coverage of family planning services. 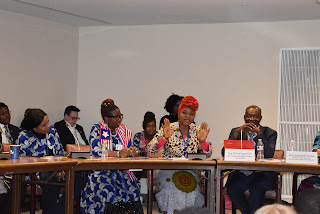 It’s hard to believe that we’re over halfway through our time at CSW; I have learned so much and am continually inspired by so many women from all over the world. I only hope that U.S. leadership will soon be willing to replicate the commitment and progress demonstrated by so many of our global partners and colleagues.

Posted by Amelia Steinbach At 11:14 PM