The presentation for which we have been preparing for the last seven months happened this afternoon, and I am so grateful for the opportunity we had to share our research with such a variety of people - from high-schoolers to longtime advocates, Cities for CEDAW advocates to people who just happened to stop in for the presentation. I was really happy with my presentation, and proud of our group for introducing our research in a manner that conveyed our passion and expertise. I was blown away by the number of people in the audience and appreciative to the experts from San Francisco for sharing their experience and success stories. 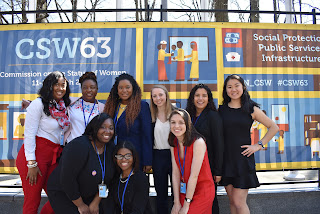 Aside from our Cities for CEDAW presentation in Social Hall, we also attended NGO CSW Forum Orientation this morning. It was a helpful reference in terms of learning more about UN Women vs. NGO CSW NY, as well as discussing the varying locations of each event so that we can better organize our schedules. Additionally, I attended "China-Abandoned Social Protection for Baby Girls and Elderly Widows," though I arrived late after watching the live stream of the official UN opening of the 63rd Session of the Commission on the Status of Women. Though I walked in late and am not aware of what happened during the first half of the panel, I was disappointed that so few Chinese women were represented in a dialogue about their country. Furthermore, I was upset about the overall theme of the event - that forced abortion doesn't need to be a partisan issue and it "doesn't matter if you're pro-life or pro-choice" "because it's no choice at all." I feel like that sentiment ignores the true meaning of pro-choice - that a woman should be able to decide when and if to have a child; this applies to wanting children as much as it does to not wanting children. "No choice at all" is equally relevant to policies which force women to have a child as much as it does to policies that force women to abort a child. One of my greatest hopes for women's advocacy throughout the next few decades is that we will be able to help others to understand how fundamental bodily autonomy is and that women need to be able to decide the structure of their family - no matter what that structure entails. 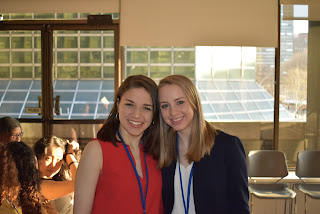 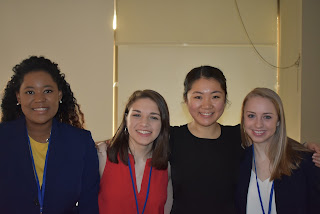 Tomorrow, I am excited to attend the "Women in Power with the Secretary General" event and hear more from António Guterres about his commitment to women's rights and advocacy work. I am grateful that we have a Secretary General who is so passionate about the issue, though I hope that one day soon, the Secretary General will actually be a woman, and the women and girls who attend CSW each year will see themselves represented at the highest level.
Posted by Amelia Steinbach At 8:47 PM