Women Are Key to Peace Building

Friday was a whirlwind. NGO CSW 63 finally came to an end for us, but it went out with a bang! I attempted to go to an event on women and unpaid care hosted by Mexico, but due to overcrowding, I could not stay. However, I was able to attend a side event hosted by Sri Lanka and Kenya titled Women Investing in Peace. Both countries had representatives present that were able to speak about women leaders that have dedicated their lives to building successful foundations for sustainable communities. This event was very informative and inspirational since we never get to hear or see the women leaders of the world fighting (peacefully) for the rights for their people. I think people only think of Winnie Mandela when they think of women global leaders.

Later Dr. Rieman and I attend a documentary screening title Women, Peace, and Power hosted by Ireland and Peace is Loud. This documentary follows the stories of women activists, politicians, and citizens in Northern Ireland, Afghanistan, and Liberia as they try to influence peace in their respective countries. This film emphasized how men use violence, power, and coercion to fuel war and their personal propaganda. While countries are worn-torn, children dying, and women and being raped, male leaders are inflating their egos and pockets from back-door deals. Women in Northern Ireland, Afghanistan, and Liberia (and all around the world) are taking a stand against their government tearing their families and countries apart. In 2006, Liberia selected their first woman president Ellen Johnson Sirleaf. Talk about moving mountains!!! 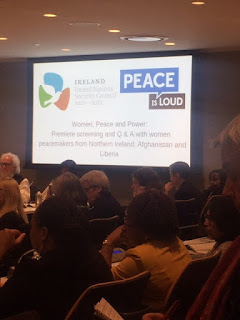 To end the night we had a night out of pizza (my favorite) with Bennett alum Abaynesh Asrat of the Class of 1974. She is truly a gem and was very excited to see her fellow Bennett sisters again. During dinner, Africa, Dr. Riemann, students from NYU (I can’t remember their names), Zybrea, and myself had a rich and informative conversation on a plethora of topics. The one that sticks out most to me is the conversation of feminism and why many young women, especially women of color do not label themselves as feminists. Let’s just say that we all came to an understanding (except for Beth) that it is not about the intent of feminism or feminist organizations, it’s about the impact. Overall, I am eternally grateful for this experience with WomenNC and NGO CSW 63. Although challenging at some points, the trip to the UN was totally worth it! Oh, how I am going to miss NYC pizza!!! 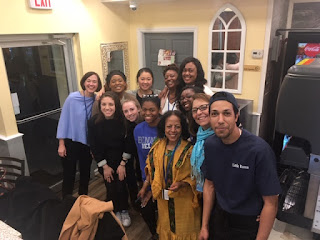 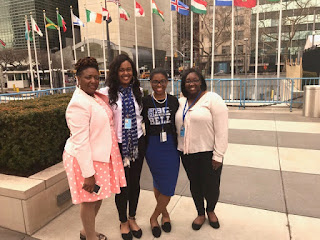