A few weeks ago, through the help of Beth Dehghan, I was fortunate enough to be connected to a woman who worked at Feminist Majority Foundation and was planning an event for the NGO Forum at CSW. The event, "Teaching Consent and Ending Sexual Assault at Schools and Universities," seemed very well suited to my interests and experience, and she offered me a spot on their panel of high school and college students. That panel occurred today and I was blown away by the turnout and dialogue that ensued.

The room was quite literally filled to the brim, with a couple dozen people standing because there were no seats left. There were nine of us on the panel, and I was one of only two college students. The other panelists were largely from the United States - primarily California - with two also hailing from Nepal. It gave me an immense amount of pride and hope for the future to hear so many high schoolers speaking passionately and intellectually about the important of discussing these issues throughout an individual's time prior to college. I feel so much gratitude knowing that the communities of which they are a part have advocates working to increase information and transparency for their peers. They were very informed about sex education policies and Title IX, and spoke about programs they were bringing to their schools to emphasize consent and healthy relationships. 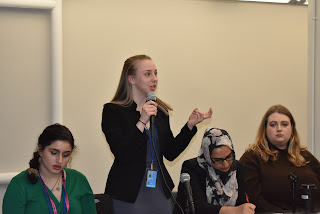 For my portion of the panel, I spoke primarily about work that I did as a senior in high school through an independent study titled "Implications of Gender Inequality." As I shared with the panel, the year I conducted the independent study was also the year of allegations against Roger Ailes, the access Hollywood tape, Trump's election, and the Women's March. Spending a quarter dedicated to rape culture was virtually inevitable, and I focused on campus rape culture. Shortly before The Hunting Ground, had been released and I had the privilege of interviewing Andrea Pino for my class. Pino was one of the two students from UNC who filed the first-ever Title IX complaint against a university for its handling of sexual assault cases. For my quarter project, I created a curriculum for the freshmen health classes at my high school that highlighted statistics, vocabulary, resources, legislation, and court cases relating to consent and rape culture. Additionally, it discussed case examples such as student-athletes and politicians. I shared with the panel that, while interviewing Andrea Pino, she told me that, by the time she graduated from UNC, every single school she had applied to as valedictorian of her high school was under federal investigation by the Department of Education for Title IX violations. 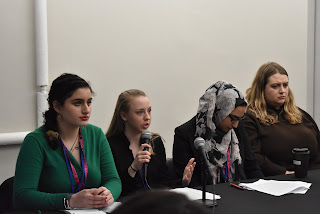 I also discussed Duke specifically, citing a recent survey where 48% of female-identifying undergraduate respondents reported being sexually assaulted during their time at Duke. As our Vice President of Student Affairs said, that number is likely far, far higher when you include incident such as groping, which nearly every college-age woman has experienced.

A major highlight of the event was getting to meet Eleanor Smeal, Founder and President of Feminist Majority Foundation and huge feminist icon, as is probably evident from the looks on my face in the pictures below. Eleanor is also a graduate of Duke, and it was wonderful to bond with her for a few minutes! She seemed exciting about starting a Feminist Campus group at Duke, and I look forward to hopefully working with her in the future to make that happen! 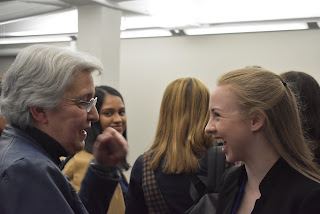 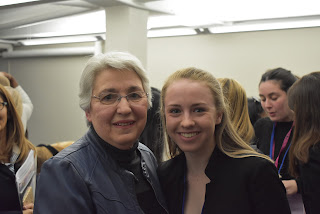 During the rest of the day, I also attended the Official Meeting at 10am and the WIN panel that discussed San Francisco's gender commission and ongoing work in Iran and West Africa. We ended the day with a pizza dinner hosted by Abaynesh Asrat, a friend of Beth's from Ethiopia. It's hard to believe that tomorrow is our last full day at CSW. It has been an immensely rewarding and informative experience, and I will be sad to see it end, but grateful for the lessons and connections that I will take with me for the rest of my life.
Posted by Amelia Steinbach At 12:01 AM