Today was our first day of official CSW 63 events. We spent the morning and early afternoon at the Tribeca Community Center for NGO Consultation Day programming. We heard from UN officials, various performing artists, and panelists from a variety of countries and cultures. I was impressed and excited to learn that this is the largest commission gathering in UN history, though it is quite infuriating that so many were not able join CSW 63 because of visa denials. This day of programming was very useful in evaluating social protection and infrastructure, and its relevance to gender equality. 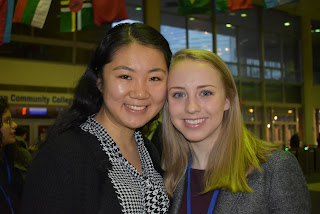 My favorite artistic performance was the spoken word, by Climbing Poetree. Some lines that really stuck out to me were “us birthing the world everyday,” “up is the only direction we have to go,” “unconditional love never meant that the conditions of the love would be your survival,” “visionaries of a world that we have not yet seen but that we fiercely believe in,” and “if so much is controlled by so few, imagine  how much so many of us can do.” I was blown away by their emotional and personal performance and grateful that I had the opportunity to hear from them. 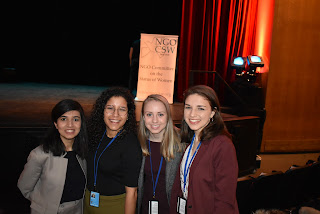 My favorite panel was the one moderated by the Amnesty International Journalist, with under-Secretary-General and Executive Director UN Women Phumzile Mlambo-Ngcuka and Irish Ambassador Geraldine Byrne Nason. They specifically emphasized childcare and paid leave in conversations about social protections and discussed how they believed the most severe form of oppression against women as being the fact that they are disproportionately burdened with care and domestic work. I also agree with what they said in regards to believing “tradition” and “culture” as unacceptable excuses for oppression. 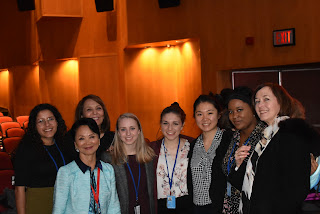 I also enjoyed the panel on “Social Protection Schemes,” where panelists from around the world discussed specific success stories in their respective countries. I was particularly interested in Equal Pay in Iceland and their legislative change in placing the burden to prove equal pay on employers, rather than forcing employees to prove equal pay. I also enjoyed hearing about advocacy work for widows, as that was not a topic that I had ever learned about before today. 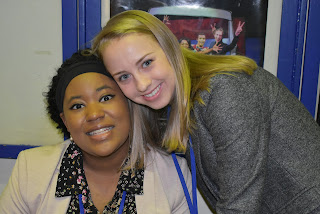 We ended the day with a large-group dinner at Copinette, which was a wonderful way to destress and bond as a group. I am excited to attend various panels and sessions throughout this week, and to present our research tomorrow. I hope that our work with Cities for CEDAW will inspire others - particularly young activists - to continue similar work in their respective homes.
Posted by Amelia Steinbach At 10:38 PM