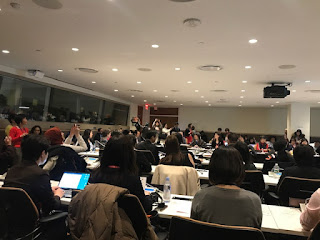 At my first Official Meeting, I realized that my passion lies in work on the local, state, and, even, federal level. It is difficult for the international community to have conversations, because, to no fault of their own, each country comes from a different perspective and circumstance. The only shared guidance are the Sustainable Development Goals set forth by the United Nations. However, the SDG's remain broad and rely on individual countries to interpret and implement the goals. 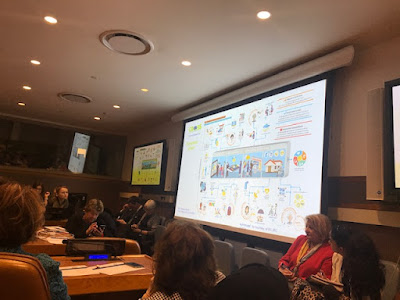 I attended my next event, Social Inclusion for Women Being Independent, because I liked the title of the event as I think of myself as a highly independent woman (almost to a fault sometimes). Led by Japan, I heard facts similar to other sessions - women are burdened by unpaid care time, gender equality is important to the economy, women have lower labor force participation, and technology can play an important role in engaging women's labor force participation. However, Dr. Yasue Nanoshilou mentioned that, like Virginia Wolf emphasized, women must have money and a room of their own. I began thinking that obtaining money is much easier than obtaining a room of our own, because whether we get a room of our own is often not up to us. One person shared about her experiences of constantly being sexually assaulted at her workplace in Japan, even in the midst of Japan's high economic development as the third largest GDP in the world. 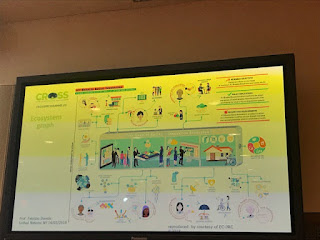 In my next event, The Use of New Technologies for Promotion of Work-Life Balance & Advancement of Family Policies for Social Inclusion of Women and Men, I, once again, realized the power of technology to ensure that each individual can live the multiple roles they have in society. This especially important for women as they have more roles than men as mothers, daughters, workers, and wives. It is unfortunate that men do not have more roles than worker, and I believe that the multiple roles women have hinder their participation and level of participation within the formal economy. Like many panelists emphasized, women's multiple roles in society make work flexibility especially important for their work lives. In Britain, companies with 250+ employees have mandated that they must publish their gender wage gap. I believe that it is also important to require greater transparency about flexibility in the workplace. The session ended with Auxilia Ponga, Secretary Ministerof Gender of Zambia, questioning us on what we are doing within the home to enforce gender norms? She emphasized that such gender norms often determine the lifetime outcomes of women which make them important to question and criticize.
Posted by Unknown At 4:24 PM