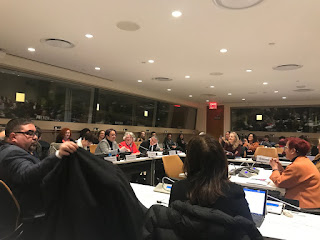 Amelia, Jada, Sara, Dr. Riemann, and I were debating over breakfast whether we would make it into the Unpaid Work and Its Consequences session hosted by Spain, and, over oatmeal and hard boiled eggs, we decided that we would just try to make it in. This session showed us 1) the power of translation earphones 2) the phenomenal feminist that is Dr. Durán. Dr. Durán is one of the most well-regarded researchers in unpaid care work, and she set the scene well by stating that there is a difference between ideas, which are explicit and codified, and beliefs which often haven't been debated. In our capitalistic economies, we assume that wealth of nations come from selling, but unpaid work, which isn't sold, creates as much wealth as paid work. Women spend 3.2 times more than men in unpaid care work which often even isn't accounted for when calculating a nation's wealth. At the end, I asked a question: if unpaid care work constitutes a large proportion of women's time, then it would seem that women desire greater flexibility in their work. I'm curious about how this greater desire for flexibility will affect women's labor force participation in the gig economy where jobs are more flexible. 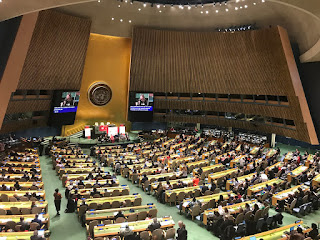 After this exciting opportunity, we sat in on the General Assembly where we listened to at least six presidents and prime ministers in a span of an hour. The President of Croatia specifically said that it is a problem that women go into social sciences and men into STEM, because STEM is the future. In hearing a world leader confirm a problem that I was actively working to address in the space of computer science, I felt more validated in my mission. While I am constantly doing research and on the ground work in computer science education, I felt a high-level confirmation that my energy and time has been well-spent in solving this thorny problem. 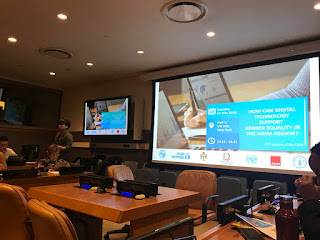 In my last panel, I learned that Sustainable Development Goal 5 is enabling technology use for women. This can be extended not only to use but also to creation of technology. In fact, the European Union is creating a a strategy for developing the digital economy. Susan Kuaria, Senior Gender Officer at the Food and Agriculture Organization at the United Nations, shared that technology must be adaptable to the needs of women, which are often different than the needs of men. In my opinion, the only way to ensure that future technology meets the needs of all individuals, we must invite all people to collaborate in making this technology. She also shared how a local community in Papua New Guinea is using blockchain technology to track the quality of pigs. While I have done little work in blockchain, I am curious to understand more about why blockchain is specifically necessary and helpful in this work. Additionally, one of the most interesting aspects of this conversation was that women in business recruit other women. This means that by investing in recruiting and advancing one women in technology jobs - this women will have ripple effects in recruiting and advancing more women. Finally, Liat Shenster, Director of Systems Engineering Sales at Cisco, shared with us about the Cisco Networking Academy which has 15 academies across Jordan and 8,00 graduates with better coding skills. While she emphasized the importance of public-private partnerships in this work, I'm wondering how PPP's can play a role in more sustainable, systematic education efforts, like co-curriculum creation or teacher training in computer science education.
Posted by Unknown At 6:39 PM