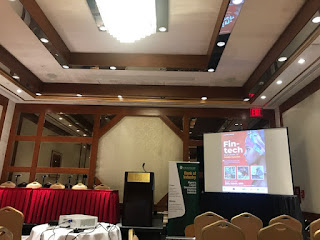 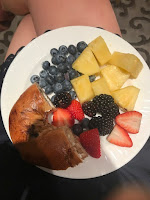 My interest in both technology and finance, and especially the intersection of the two, was well satiated by my first session: Fin-Tech as a Driver of Gender Inclusion. Dr. Dabesaki from the Ford Foundation began by detailing that finance and technology are restricted spaces, and investments have mostly gone to male startups. There must be lower barriers of entry into the financial services sector, and, ironically, technology could be a solution to that. In many communities across Nigeria, Mines.io is allowing individuals to get small loans through technology. Asian Sowho, founder of Mines.io, pushed us to think through the idea that if we continue having the conversations, although important, about data privacy in emerging markets as the ones we have been having in mature markets, then we will lose out on a large opportunity for good. Unlike developed markets, emerging markets do not have a safety net to fall back on without technologically-driven solutions. Also during the panel, creator of Angela, Christina Sass shared about how we don't need more studies about the value of diversity in the workforce, we need actual solutions. In her work, Christina has seen that women technologists compete and outcompete their male counterparts. Overall, I felt that this panel well-aligned with my very specific interests at the intersection between technology and finance and making those spaces more equitable for women and people of color.

Next, in the Hot Seat: an Intergenerational Dialogue, I realized that the presidents, vice-presidents, and prime ministers of countries all talked about technology in some way whether it was about digital education, economic opportunities for women, and the internet gender gap. I believe that the future of technology requires talking about the future of women and vice versa. Overall, I felt incredibly privileged to be in the room with such influential, bold women in power - their personal stories and character inspire me to think more intentionally about being a future leader that works to lift and mentor other women professionals. However, I wish there was more discourse about the Minimal Standards. Specifically, I would have been interested in hearing amendments to the Minimal Standards regarding "equipping young people with skills to use modern technology," for I believe that it is not only the lack of skills but also the lack of internal belief and external validation that hold women back from utilizing technology in their lives. 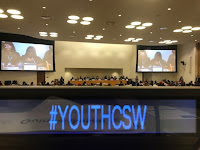 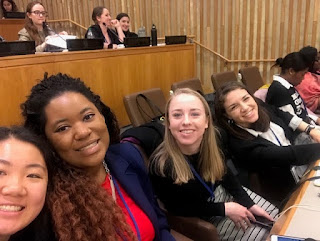 Finally, the Private Sector Wisdom for Gender Equality made me realize that the U.S. private and public sectors must be doing more to support women professionally. Inbal Long, WebPals Group COO, shared about how 2/3 of her management team is made up of women. Even more incredibly, to incentivize women to return to the labor force after pregnancy, she shared how it was not uncommon for women to be promoted during pregnancy. When she stated this, the whole room applauded this work, because this is truly transformational. I have read little research on promotions during pregnancy, but I am interested to continue watching other companies in the private sector take this lead. Additionally, one representative from the OCED mentioned that modern equality is perhaps feeling equally empowered by our ignorance by both men and women. Reflecting, men often just walk into rooms, interviews, presentations with little consideration of how little they know or how uncertain they are. I feel that I have spent years trying to adopt this mindset, but I can still do better, because the uncertainty is what I must thrive on rather than be afraid of.
Posted by Unknown At 11:37 PM