The Shoulders We Stand On

This morning Patience and I had the privilege to accompany Beth and Dr. Riemann to the US Mission for a coffee discussion on the United States’ Priorities for CSW 63. This was an opportunity to listen to government officials to speak about the government’s approach to global women’s economic empowerment. I was and still, am skeptical of this current administration’s commitment to any kind of development for any marginalized group. I am also intrigued as to how this administration is making a commitment to the economic development of women internationally, but nationally we have women suffering from the racial and gender wage gap, limited access to adequate reproductive care, and we’re still dealing with the “pink tax.” Yeah, I’m giving this W-GDP major side eye. 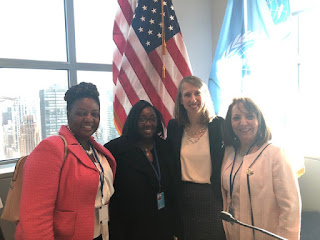 The day finally arrived for the most anticipated event this week, “Take the Hot Seat”: A High-Level Intergenerational Dialogue. This session consisted of a panel of women leaders at the UN or in their respective countries and a dynamic Moderator Olaoluwa Abagun. They invited young women from the audience to ask questions about youth, policy, and the future. Ms. Phumzile Mlambo Ngcuka, UN Under-Secretary-General and Executive Director of UN Women, stated that she will make sure young people are in attendance at Beijing+25 to have their voices heard. Beijing+25 will give youth the opportunity to speak for themselves and the future they want. Thank you for believing in young people!!! Ms. Jayathma Wickramanayake, UN Secretary General’s Envoy on Youth, spoke about the inclusivity of women in China and Youth 2030, which will integrate young people in the agenda of youth empowerment. She ended her speech with this statement: “if there is no space at the table, then we have to make our table bigger.” This has now become my motto for the rest of my life! This was by far the most engaging and impactful event of this week, I feel inspired and motivated to work harder for gender equity.

The next session I attended was, Family Care: What Are the Costs to Women and What is the Role of the State? Hosted by the Czech Republic and France. I hadn’t planned to attend this session, it just happened to be close to the previous one, looked interesting, and my feet were hurting so I was able to grab a quick seat. However, this session was a pleasant surprise. To my way of thinking, I thought most if not all European countries had better health care systems and better systems in place for the welfare of women and children. I was wrong big time. The Czech Republic has one of the highest gender wage gaps, and women have to choose between having a family and a career (this seems to be universal). In New Zealand, women are penalized for having children under the “motherhood penalty,” which means the longer they stay out for maternity leave, then the harder it is to find employment. If a woman that recently gave birth returns to work, then she will experience a 4% decrease in earnings. As women, we need all of our coins!!! While sitting in this session, I was shocked that women are being penalized for having children, but wouldn’t the world literally stop if we didn’t have children. We have more work to do people!!! 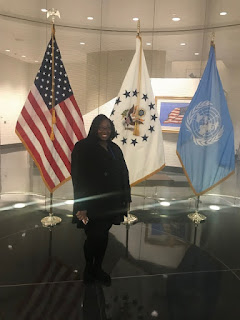 The final session I attended was Women and Girls of African Descent, hosted by The Honorable Jackie Weatherspoon. First, I must say that this was the first session I saw at NGO CSW 63 that was specifically for Black women and girls (clutches my imaginary pearls). Although the UN has created a space for other people’s voices, Black women and girls still have to fight to be seen and heard. We have to create our own spaces, speak for ourselves and our sisters, and always stand on the shoulders of those who have come and fought before us. 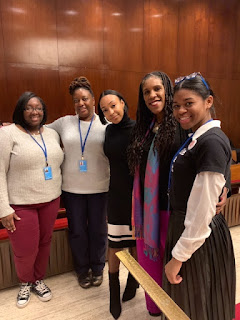