As I write, we are all sitting in LaGuardia Airport, waiting for our (slightly delayed) flight. It is hard to believe that our trip to New York has officially come to the end; the days felt quite long, but the week flew by. I am incredibly grateful for the wonderful experience that I have had with WomenNC over the last several months. I have learned so much - about activism, my research topic, myself, and effective advocacy in international settings. Beth and Dr. Riemann have been consistently committed to our work, and I am so thankful for the hours and hours they invested in bettering us, the research we conducted, and our presentations.


On our last day, the majority of us attended “Youth Mobilization Spaces.” This event combined international representatives, UN Women leaders, NGO members, and youth from a variety of backgrounds and areas of expertise. The highlight of my day was our small-group breakout session about the role of youth in the Global Forum that will be launched in recognition of Beijing +25, as well as a myriad of other anniversaries occurring next year. UN Women are in the beginning stages of planning for the event, and we got to play a role in deciding the most effective way to include a representative group of youth activists from around the world. The primary conclusion that we reached was that these activists need to be selected on a regional basis, and each region’s representatives should be broken down to the issues that are most relevant in that area of the world.


Caroline, a deaf woman from South Sudan who was a part of our focus group, continually pushed us to be more inclusive in our advocacy. Throughout the entire day, she jumped into conversations to point out how certain solutions did not accommodate for various disabilities, and proposed alternative methods of reaching girls around the world. Caroline’s advocacy was an important reminder that it is critical to include people who have experienced forms of oppression that are not often included in social justice dialogue.


I also really enjoyed meeting Hadeer, a young Muslim woman from New Zealand who works for Global Citizen. We discussed the recent tragedy in her country and the Islamophobia that seems to be expanding across the world. I also asked her about the international perspective of the United States and learned more about her life in Auckland. 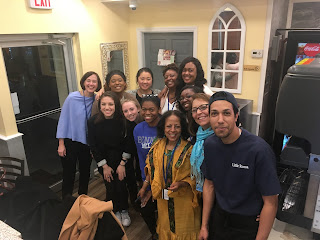 I feel so much gratitude to this program for the training, mentorship, and friendships. I hope that we will all be able to stay in touch for many years to come; for now, I plan on following up with activists I met throughout the last several days and working toward making the governmental representatives of North Carolina and the United States more active proponents of gender equity.
Posted by Amelia Steinbach At 8:47 PM